In the fall of 2011, my family and I made our first trip to Hawaii. In what should be no surprise, we made sure to make time for a visit to Pearl Harbor. My knowledge of World War II is probably deeper that the average bear, but I’m not even close to being an expert. Before visiting Pearl Harbor, I had never really considered the impact of that attack on civilian life in Hawaii. Their exhibit spaces made that abundantly clear, and I found myself thinking deeply about all that had to happen after the attack. And of course, the USS Arizona Memorial was incredibly moving, even though it was also incredibly crowded.

Like any good museum professional/tourist, we made a lengthy stop in the museum store.  While there, I picked up this little book. 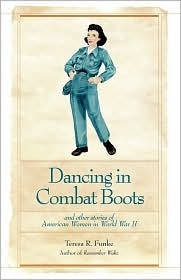 And then it sat in my to-read pile for two years.  And I felt bad when I finally read it, because it is a gem of a book.  Funke took real women and fictionalized their war stories.  She did an excellent job of choosing women from a variety of backgrounds that did a variety of things in a variety of locations.  At the back, there’s a paragraph about each woman’s real life, adding a few nuggets of details.  And the stories themselves are beautifully written.  I think my favorite was “Three Thousand Men.”  Attie sketched thousands of soldiers in their hospital beds in LA.  The story itself takes place in modern times, as Attie is trying to find a permanent home for her copies of the sketches.  Attie says towards the end of the story:

I’m not asking for recognition for myself.  But some of these boys never made it home.  Do you see?  There should be a place where their families can go to find these portraits.  There should be a way for people to see what we sacrificed in that war, a whole generation of men lost.  I didn’t paint anything else those four years.  I put all my energy into this.  Four or five sketches a day, and then I’d have to stop.  Your eyes can only take so much.  This was the most important work of my life.

There is also a story set on December 7, 1941 and the days following.  Newlywed Marjorie is living on base with her army husband.  The chaos of the attack is vividly brought to life as Marjorie flees with a neighbor, not knowing if or when she’ll see her home or husband again.  In huge, dramatic events like this, it’s sometimes the details that capture the imagination.  When Marjorie returns briefly to her home, she instantly notices the dirty dishes in the sink: “‘Never again will I leave dirty dishes in the sink,’ I promised myself.”

World War II is such a big story–just go to any bookstore and see how many books about the war span the shelves, especially compared to other wars or periods in history.  Is there a place for a small book of fictional stories about women on those shelves?  I would argue that books such as Dancing in Combat Boots give people something small enough to hold on to.  Shelf after shelf of fat books about military strategy, soldiers, the European Theater, the Pacific Theater, the homefront, and politics are going to intimidate a lot of people.  But by its very nature, fiction is less intimidating.  And when you have a book like this, one that has good, solid historical research behind it and tells engaging stories, you’re one step closer to teaching people about the past.

I’ve recently returned from a three week professional development seminar that was all about the place of history museums in the world around us.  We spent hours discussing history’s role in public life and ways to increase the relevance of history.  Some people argued that we have to teach the public more about the ways of doing history.  There was also a subtle undertone that fluffy, feel good history was something we should abandon–we must focus on the Seriousness of History.  I have always believed that you lure people in through their comfort zone, and then you push them a bit.  With that pushing, they may realize they’re ready for a deeper exploration of the past.

And that’s what books such as this do so well.  The look of the book is utterly charming, but inside are some difficult stories about the Japanese internment, sexism in the workplace, and the fears when a POW comes home.  And these stories certainly have inspired me to look again at the stories surrounding World War II.